A bit of a different review format this time! I recently picked up Demeter and Varuna at the same time and since they are very similar I decided to do a comparison review! In the end I hope to answer the question: which one should you get?

Demeter is a standalone flip-and-write game that features the same graphic style and is set in the same universe as the publisher's earlier game Ganymede.

You are a scientist and you just boarded a ship departing from Ganymede to Demeter 1. Demeter, a red dwarf planet, has two twin moons: Demeter 1 and Demeter 2. Each of them has an ESI (Earth Similarity Index) of 0,98 and the first reconnaissance flight revealed the presence of dinosaurs on Demeter 1. Chahrazad will lead this new expedition as it is now your turn to explore and discover the secrets of the first moon of Demeter!

The goal of the game is to score the most MP (Mission Points). These points represent your ability to discover and to study the dinosaurs in their environment.

Varuna is a standalone flip-and-write game that features the same graphic style and is set in the same universe as the publisher's earlier games Ganymede and Demeter.

As a scientist, you just boarded a ship departing from Ganymede to Varuna, an oceanic moon.

The goal of the game is to score the most MP (Mission Points). These points represent your ability to discover and to study the dinosaurs in their oceanic environment.

—description from the publisher

The core gameplay of both Demeter & Varuna are very similar. Each game has a fixed number of rounds (Demeter has 12 rounds and Varuna 13). Each round a player flips over a card from each of the 5 decks of cards. Each player chooses a flipped card and performs the pictured action and bonus (in that order).

The different actions are related to discovering dinosaurs, studying them and upgrading your capabilities. This is done by crossing of areas on your player sheet.

The biggest addition in Varuna (also referred to as Demeter 2) is damage. Since you're now researching and studying underwater dinosaurs you need to manage you submarine. In the decks are several cards that show damage symbols. If you choose the card with damage you negate the damage but can't perform an action (you still get the bonus) so you can do less. However taking damage will cost you points if you collect too many, and it can even eliminate you from the game. Building up your shield is essential in Varuna. This adds a bit of tension and an additional thought layer that Demeter lacks.

Objectives also work slightly different in Varuna. You still need to unlock an objective to be able to score it, but instead of scoring it at the end of the game you score it immediately. Timing is more important in Varuna because of this. Scoring it at the wrong time can cost you a lot of points that would be gained otherwise. The objective is also flipped if a player claims it making it harder for other players to claim that objective. So you need to keep an eye on your opponents a bit more.

Discoveries are a way to claim shells and gain immediate bonuses. Whenever a player does a discovery they can choose one of the four available discoveries and gain the listed items. Shells are another scoring opportunity because you multiple your shells with the number of different dinosaurs you've discovered.

Upgrading is also a bit different since you're now upgrading rooms in your submarine. This combines the buildings and upgrading from Demeter into a single area with multiple paths you can follow gaining a wide variety of benefits.

There are a few more changes in Varuna but the above ones are the most important ones.

Initially the idea of this review was to provide a duo review on both Demeter and Varuna. However while gathering my thoughts about both it became more and more clear that there is only one you need to own. Let me tell you why.

Varuna is an evolution of Demeter in every aspect. Game flows exactly the same but due to the changes listed above it's a much more complete experience. Due to the various variations each game and more strategic paths, due to a number of changes, Varuna has a longer shelf life. I can see Demeter getting boring a lot quicker than Varuna.

Demeter is still a fine game, but it has become completely obsolete now Varuna is out. It almost makes me think that Varuna was just created to fix some flaws from Demeter.

The player sheets can look a bit intimidating but the iconography guides you through the game pretty well. Artwork is of course subjective, I think it looks good while my girlfriend absolutely detests the cover of both boxes.

All the changes introduced in Varuna are changes I like and not something that make it a lesser experience to Demeter. The mechanics in both games are implemented well and have a few twists not seen in other games (for example the bonuses getting stronger the more times you pick from the same deck). Was I blown away by the mechanics and twists? Not really, it's not something groundbreaking.

While I like the theme, it is pretty much absent during gameplay. Sure you're discovering dinosaurs and they've tried to build a story around it but in the end I think the goal was to just create a dinosaur themed flip-and-write. The story also tells us something about exploring moons, but this is hardly reflected in the actual gameplay.

Both games are a point salad type games where you get points for almost everything. With Demeter I really had the feeling I couldn't achieve anything before the game was done. Varuna has one more round and that makes a world of difference, I'm wondering if it hurts to also play one more round in Demeter. But even in Varuna it seems like it could have been a bit longer.

So to answer the question, which one you should get: Varuna. 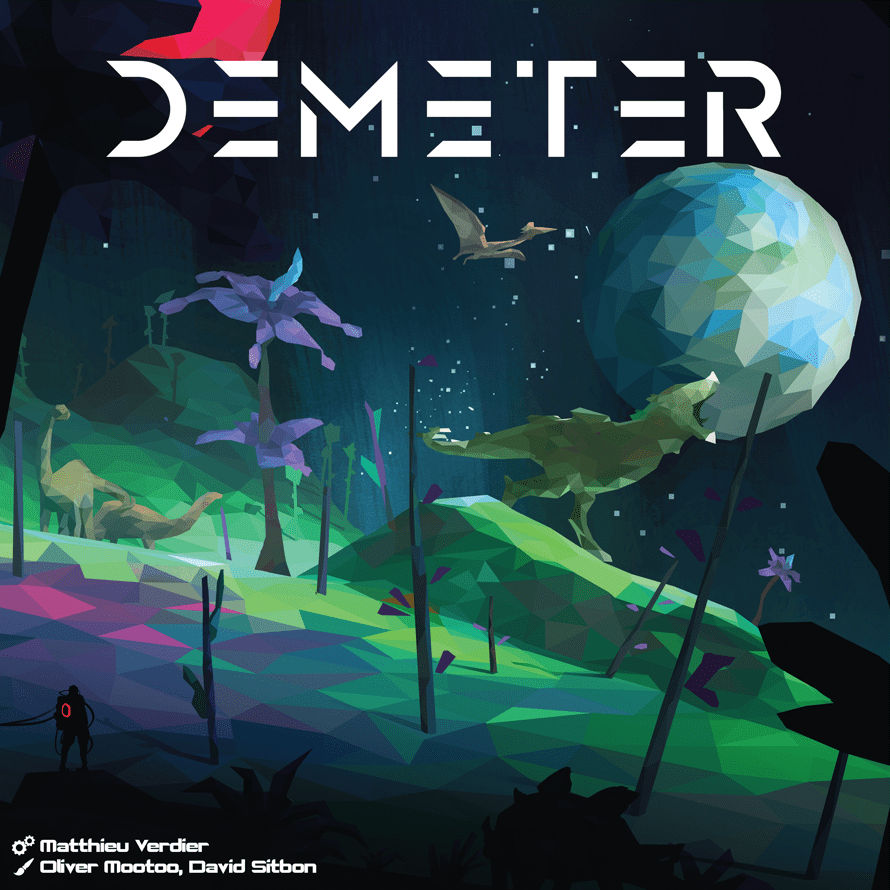 While Demeter is a fine Flip-and-Write about dinosaurs it's nothing groundbreaking. Due to the release of Varuna, which is Demeter 2.0, it has become obsolete and Varuna is the better purchase. 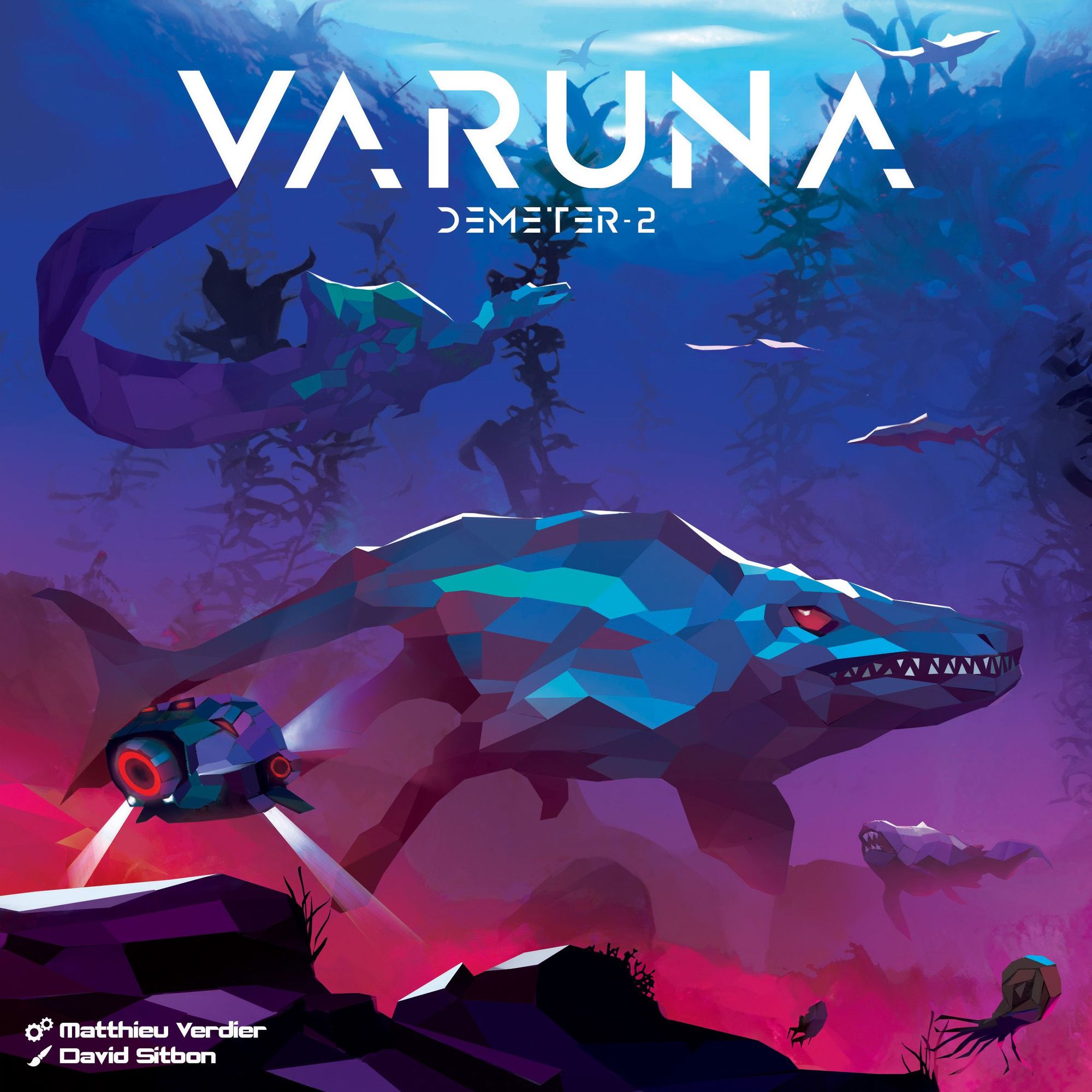 Varuna is an evolution of the Demeter game system and on all fronts the better game. It has a longer shelf life and the changes introduced are all for the better. It's a fine flip-and-write without many flaws but it's also not something innovative or special. Unless you eagerly want land dinosaurs this should be the one to go for.

Looking for alternatives or similar games? Have a look at Welcome to Dino World or Dinosaur Island: Rawr 'n Write 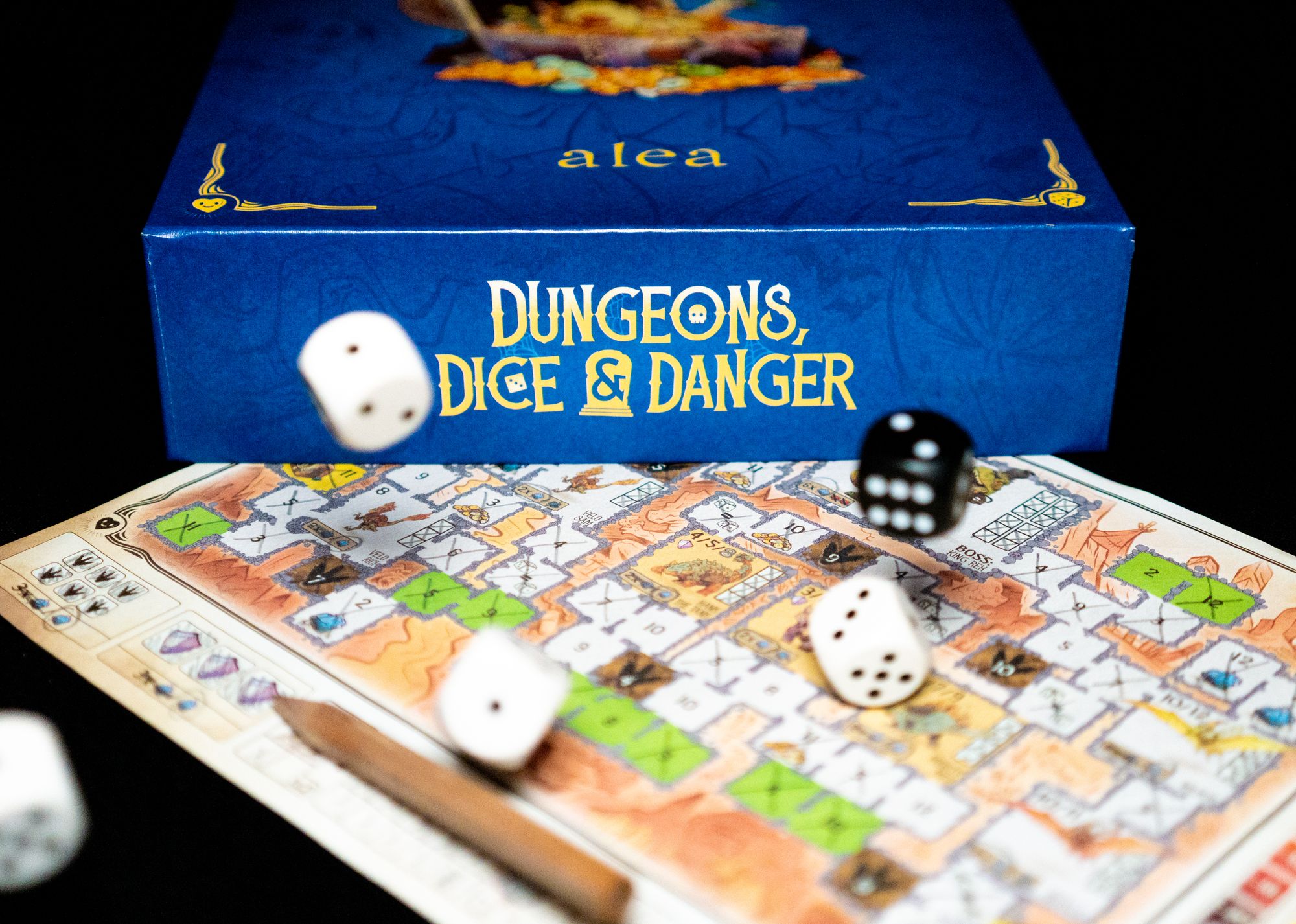 Use dice to defeat monsters as you descend into a dungeon. 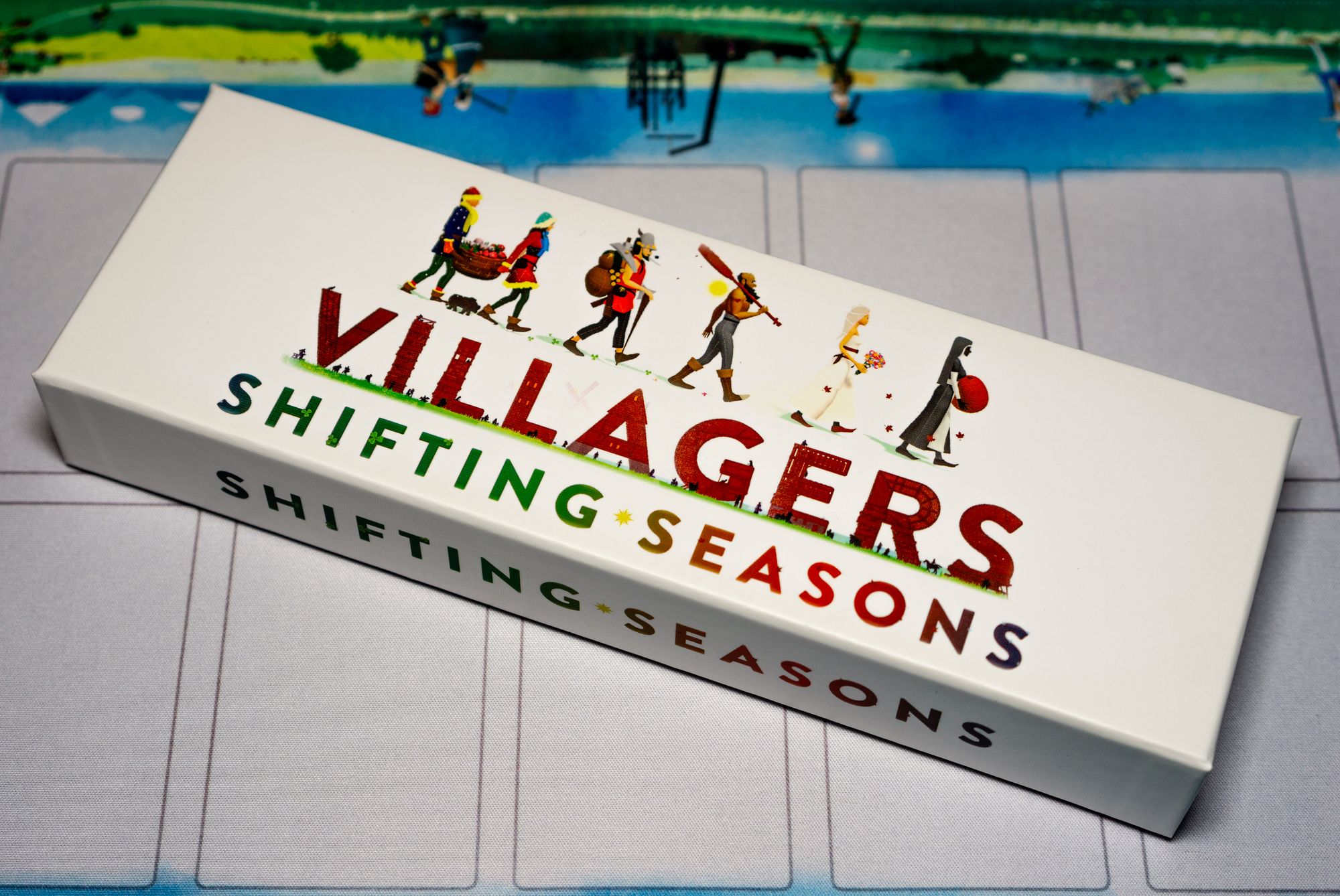 Events and new villagers bring even more opportunities to get rich! 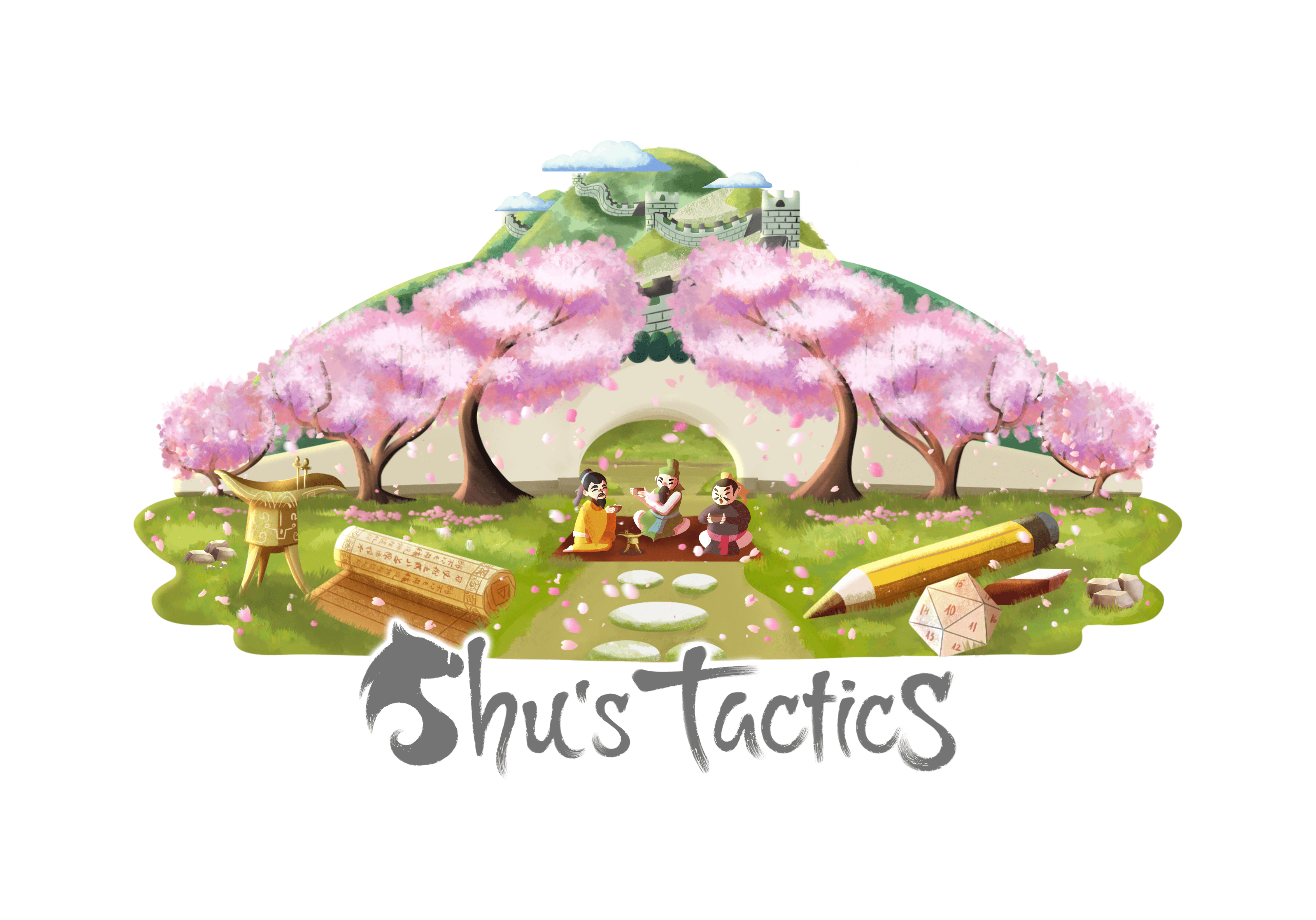 Build your tactics, devise strategic plans, and write the story of the Shu kingdom.

Explore The Isle of Cats and draw what you see!